Ani is a ruined medieval Armenian city now situated in the Turkish province of Kars and next to the closed border with Armenia.

It was first mentioned in the 5th century and abandoned in the 17th, Between 961 and 1045, it was the capital of the Bagratid Armenian kingdom that covered much of present-day Armenia and eastern Turkey. Called the “City of 1001 Churches,” Ani stood on various trade routes and its many religious buildings, palaces, and fortifications were amongst the most technically and artistically advanced structures in the world. At its height, the population of Ani probably was around 100,000.

Long ago, renowned for its splendor and magnificence, Ani was sacked by the Mongols in 1236 and devastated in a 1319 earthquake, after which it was reduced to a village and gradually abandoned and largely forgotten by the 17th century. Ani is a widely recognized cultural, religious, and national heritage symbol for Armenians. According to Razmik Panossian, Ani is one of the most visible and ‘tangible’ symbols of past Armenian greatness and hence a source of pride.

In 1905–06, archaeological excavations of the church of Saint Gregory of King Gagik were undertaken, headed by Nikolai Marr. [Public Domain, Link]

Church of St. Gregory of the Abughamrents; in the background is the citadel. [CC BY-SA 3.0, Link]

Saint Gregory of Tigran Honents – frescoes on the southern wall: the Dormition. [By Ego – Own work, Public Domain, Link] 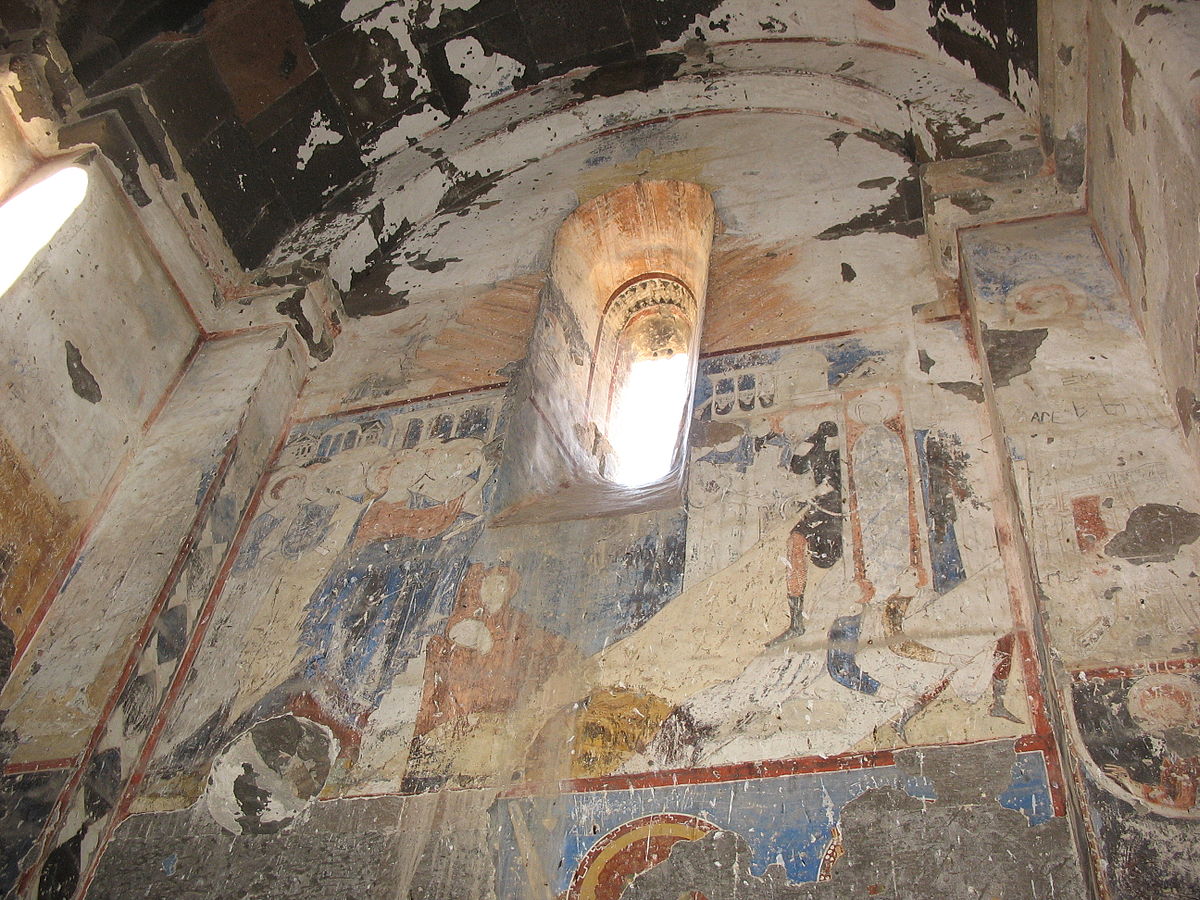 Saint Gregory of Tigran Honents – frescoes on the northern wall: the Raising of Lazarus. [By Ego – Own work, Public Domain, Link]

Fresco on the ceiling of a cave church (supposed tomb chapel of Tigran Honents) outside Ani. [By en:User:Esavit – http://en.wikipedia.org/wiki/Image:Cave_fresca3.jpg, CC BY-SA 3.0, Link]

Songs and poems have been written about Ani and its past glory. “Tesnem Anin u nor mernem” (Տեսնեմ Անին ու նոր մեռնեմ, Let me see Ani and die) is a famous poem by Hovhannes Shiraz. It was turned into a song by Turkish-Armenian composer Cenk Taşkan. Ara Gevorgyan’s 1999 album of folk instrumental songs is titled Ani.

The Ani security fence was constructed in 2002 around the uninhabited medieval city of Ani which is situated in the Turkish province of Kars along the border with Armenia. After the construction of the fence, the local villagers were forbidden to graze their livestock within Ani, which has led to the ground becoming rapidly overgrown with vegetation. Opponents to the fence claimed that the construction process gave scant concern to the importance of the site and caused considerable damage to archaeological remains.

This site uses Akismet to reduce spam. Learn how your comment data is processed.